Short seasons are different from the regular seasons, as they only have 15 stages ⏲️ Collect season points to get valuable prizes! 🎁

By purchasing a Golden Ticket, you will get access to all the premium rewards! Each stage of the season has a special reward that helps you pass match-3 levels 😉

Instead of special decorations and pets in short seasons, you can get unique perks: 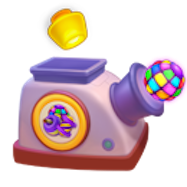